I sometimes take it for granted that I’m able to get out at least once a week and have a walk in the Peak District, obviously I realise I’m rather lucky to live within close proximity to such a wonderful place. I need my Peak District fix regularly and if I don’t get it I’m a nightmare to live with, in some ways I’m like an addict, my drug of choice is the scenery and the fresh air in my lungs. It’s only when I can’t get out that I start to get my withdrawal symptoms, I gaze aimlessly out of the window or look at the hills in the distance while I’m driving. In the last month I’ve had 2 separate Horse Riding injuries, I hurt my back while trying to control a horse and then 2 weeks later I did a somersault over the head of another that caught me off guard 🙂 So the last few weeks have been devoid of walking, I’ve been out in the Peaks for outings but I haven’t had the chance to stretch my legs properly.

The day finally arrived where I had no work, no daytime commitments and no pain in my back from the Horse Riding accidents… It was only right that I should head out and get a fix of what I had been craving. I had 6 hours spare so I decided I would head out for a short walk and take my time so as not to inadvertently trigger another bought of back pain. Autumn has most definitely arrived in the Peak District so I thought a nice walk from Grindleford would be nice and to save the High Moors for next week when my mate Andy is home.

I arrived at Grindleford at 9am after a steady drive across Beeley Moor and then through Chatsworth. Thankfully the road leading down to the Station at Grindleford was relatively car free at this time of day so I managed to bag myself a parking spot not too far from the cafe there. I put on my boots, swung my bag over my back and then headed down over the bridge. My original plan was to head up and over Millstone Edge first but when I saw the colours of the trees in Padley Gorge I couldn’t resist a closer look. I crossed the bridge of Burbage Brook, followed the road around to the left and then took the right turn at SK 2501 7888 which head up through the forest to Longshaw. The colours along this section where truly breathtaking, I’m a sucker for a pine forest usually but I don’t think you can beat broadleaf woodland at this time of year…. WOW, is the only word for it.

I continued on through the forest until I came to its edge where you then cross the moor towards Burbage Bridge. I remember the first time I ever visited this part of the Peak District, I was in secondary school and we visited in 1997 on a Geography field trip. We had come out to do depth measurements and a survey of the River Derwent and its tributaries… that’s a good word isn’t it.. Tributaries… anyway back to today’s walk 🙂

I crossed over the road at SK 2603 8069 and then made my way along the path towards Carl Walk. The rocky Carl Walk has historical significance as an Iron Age hill fort once stood here. I’ve done a quick search online and it is believed to be dated from the 8th to the 5th centuries BC. There is a rather detailed description over on Wikipedia

From Carl Walk I made my way the short distance to arrive at the top of Higger Tor, this is another one of those locations in this area that gets very busy. There is a car park just off the north western side of this Tor so it gets a lot of visitors during weekends. Thankfully, I managed to find myself a nice peaceful corner today where I could marvel at the stunning views off up towards the Great Ridge.

Many of the routes you will find on PeakRoutes tend to be of the longer variety, I went through a stage of making my walking days as big and as challenging as possible. It’s nice every now and then to slow the pace down and take the time to thoroughly soak in the surroundings. As you can see in the image above I had some amazing views today, I really made the most of the peace and quiet.

There was a cold wind coming in today so I was thankful that I had my Berghaus Down Jacket, my Extremities Gloves and my Rab hat to keep the chills at bay. I sat up on Higger Tor for a good 45 minutes or so before deciding to make my way towards the next landmark on the route which was Over Owler Tor.

I rather like the image above, It is straight from my DSLR with no trickery and it really shows how rich the colours were today. I’ve been having a discussion recently about what sort of photography is valid and what might you the viewer like to see… I’ve decided that from now onwards the images I share on PeakRoutes.com and my personal website DeanRead.net will be as real as possible, no more trickery with instagram style effects or HDR. I’m sure many people would agree with the gentleman I was having the discussion with and prefer to see images of Real Views that you can actually go and see with your own eyes. anyway…once again let’s get back to the route… I get side tracked very easily it seems both online and in real life 🙂

I couldn’t resist it, I had to climb right to the top of this stack of gritstone. Only to find that you can have a gentle walk up (pretty much) from the western side. Once again another great vantage point which gets very busy as Surprise View car park is just down the footpath from here.

The colours of autumn look as spectacular from above as they do on the forest floor. I love the mixture of colours you can see in this view. Millstone Edge has views galore, just don’t get to close to the edge as it is rather a long way down 🙂 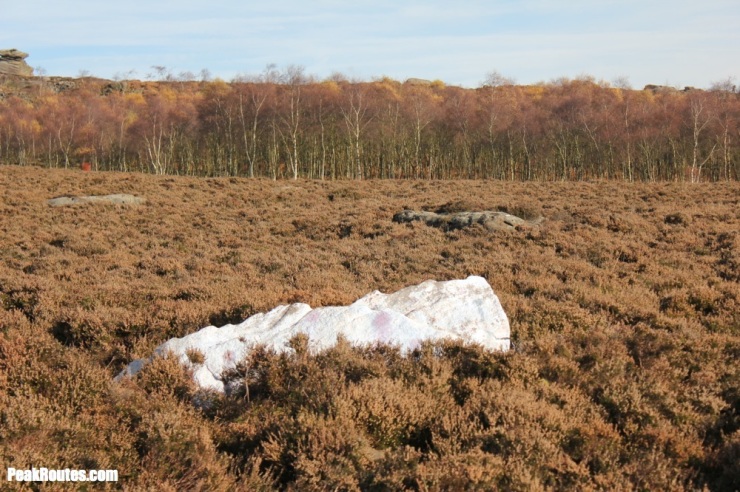 I crossed over the busy A6187 and made my way down into the disused BoleHill Quarry, A haven for climbers and photographers from what I have seen on previous visits and today was no different. There was a handful of climbers tackling routes there today and I almost inadvertently got in shooting range of a couple of photographers taking moody autumn shots through the silver birch too. Thankfully I got through without disturbing anyone or anything but the sheep and made my way along towards Padley Gorge.

I reached the end of the old quarry and the woodland quickly changes from fast growing “Lets hide the destruction we caused to the landscape” Silver Birch to broadleaf woodland. I was heading back in to an autumnal wonderland once again so I made the call to head right down to Burbage Brook again.

I was back down in professional photographers territory again and I was made well aware of the fact. I was quietly minding my own business taking a few mediocre snaps of the waterfalls (see below) when a chap nigh on man handled me out of the way to set his tripod up right infront of me 🙂 I resisted the temptation to push him and his very expensive looking Nikon camera in the Brook haha… I’d just like to put it out there that I’m a very tolerant, sociable and approachable person. However, The chap had one look at what I was doing with my cheap Canon 550D (not cheap to me), with its standard kit lens and gave me a look as if to say, “Stand aside Peasant, I’m here on a serious image capturing expedition” Gear snobbery at it’s best, I stood my ground until I had the shot I required 🙂

I have only visited Padley Gorge on a few occasions before today, I tend to stay away from places that are so near the road, not because I’m anti social but because it gets so so busy here. That is a good thing though in many ways as the local economy will benefit from it and the impact on this area seems well managed when it comes to wear a tear. I made my way down Burbage Brook and in no time at all I was back at the road and walking over the bridge towards my car. The road had become rather busy now as there was not one single space left along its length. It had been a thoroughly enjoyable walk that I would happily do again if I had limited time. Packed full of great sights and stunning views I would highly recommend it if you have 3-4 hours spare.

As Always, thanks for taking the time to read, listen or browse. Why not leave a comment and let me know what you thought, If you have any route suggestions or if you want to tell me to quit moaning about the angry photographer 🙂