I’ve just got home from a fantastic evening at Nottingham Arena where I saw Mark Knopfler and his band supporting Bob Dylan on the European leg of his world tour. As always Mark and the guys put on a fantastic show indeed. They treated us to a mixture of old MK tunes, new and some classic Dire Straits material. Mark’s band consisted of Richard Bennett on guitar, Guy Fletcher on keyboards, Jim Cox on piano, John McCusker on fiddle & cittern, Mike McGoldrick on flute, whistle & pipes, Glenn Worf on bass and Ian Thomas on drums.

If my memory serves me correctly, Mark’s set list tonight consisted of the following.. “What it is”, “Cleaning My Gun”, “Sailing to Philadelphia”, “Hill Farmer’s Blues”, “Privateering” (New Song), “Song for Sonny Liston”, “Done With Bonaparte”, “Haul Away” (New Song), “Marbletown”, “Brothers in Arms” and the encore was “So Far Away”…

I wrote a quick message to Guy Fletcher when I got home cheekily asking if he could confirm the setlist.. He replied the same night so you can be safe in the knowledge that it’s correct. Here’s the link to my question on Guy’s Forum.. http://guyfletcher.co.uk/index.php/page/Forum?showid=15428

The 2 new songs Privateering and Haul Away were fantastic, It makes me even more excited about Mark’s forthcoming album which is currently on hold due to his involvement with this tour. I look forward to hearing the studio version. I have checked out set lists from previous nights of this tour and Mark has played another new song called “Corned Beef City”. He didn’t play it tonight but I have managed to find a link to it on YouTube… http://www.youtube.com/watch?v=6LjHgzTl4r0

Perhaps one of the highlights of Mark’s set this evening was Marbletown, Lisa and I were absolutely blown away by it when we went to see the Get Lucky Tour last year at the MEN Arena in Manchester. Tonight’s rendition was just as spectacular, John McCusker was amazing on Violin. in the centre of the song they gradually strip it all down to John plucking his violin and then it builds back up slowly with Mike McGoldrick playing a stunning riff on his flute. I can’t put in to words how fantastic it is to hear such talented musicians playing as if they were all one. amazing indeed 🙂 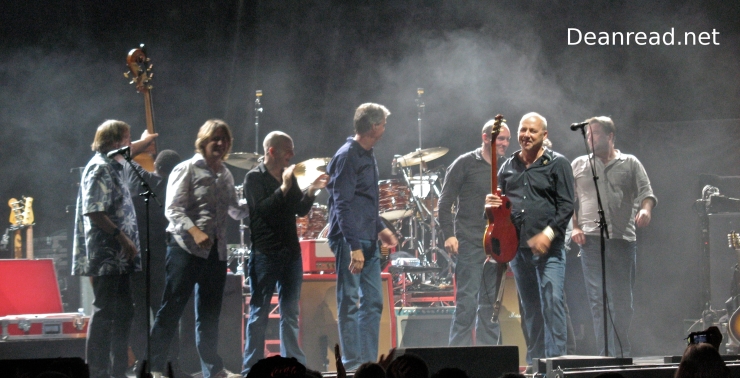 Bob Dylan came on after a short 20-30 minute interval and the Arena went mad at the sight of the legend himself. Obviously We were there mainly for Mark but it was great to see Dylan play and it was a very interesting experience indeed. I’m not that skilled in his back catalogue and if I’m completely honest, I have only really listened to the album with which Mark Knopfler has had an involvement.. “Infidels”. I am familiar with his earlier acoustic classics but tonight’s set was blues based and I’m sad to say I didn’t recognise any of the songs at all. I recognised “Like A Rolling Stone” which was Bob’s final song but that is it I’m afraid.. **Hangs his head in shame** 🙂

The sound throughout Mark’s set was perfect, crystal clear you might say. Sadly this wasn’t the case for Bob’s set, I felt like my ears were going to burst every time he played the harmonica.. And if i’m completely honest, I know i’m leaving myself wide open here… but… Bob’s voice was very unclear at times. I could hardly make out what he was singing 😦 I know this may be down to the fact that I was unfamiliar with the songs but his voice seems to have become a strange growl and I found it hard to follow. Shame really as I had been looking forward to seeing him live. 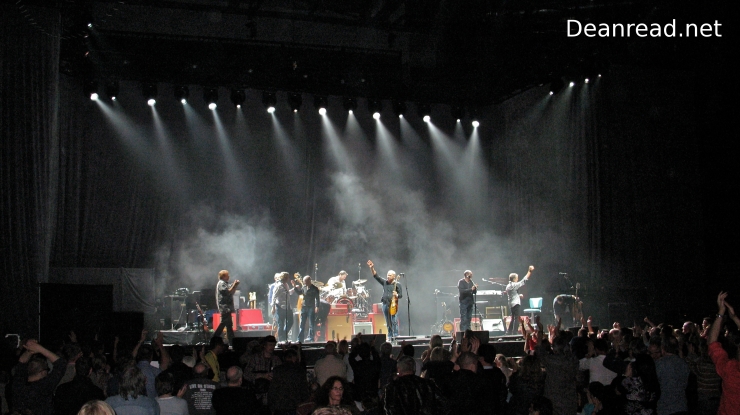 Please forgive the poor quality of the images. I used my old Canon A640 as I didn’t want to take the DSLR. Just to point out, I endeavored to respect the wishes of Mark and his band by only taking shots in-between songs and a few at the end. 🙂

The number one place to keep up to date with this tour is on Guy Fletcher’s website, he has written diaries for this and many other Mark Knopfler tours, they include some fantastic images and great incites into what goes on behind the scenes. Find Guy’s website here…
http://www.guyfletcher.co.uk/